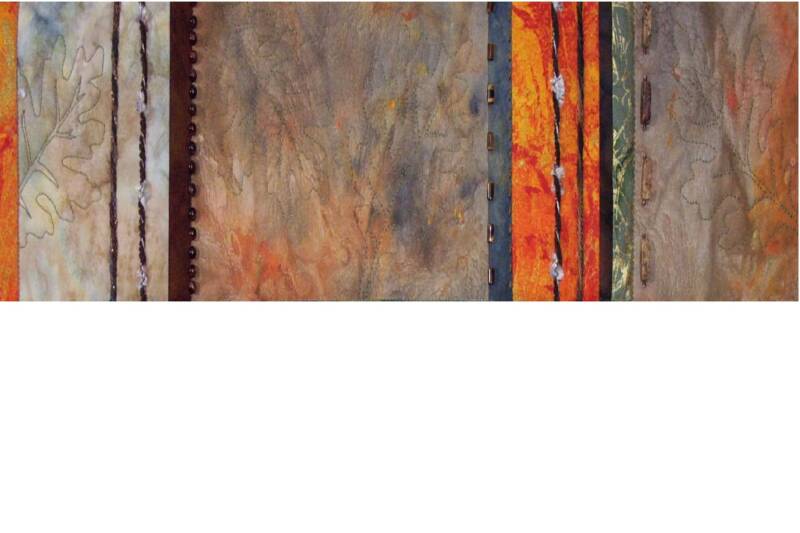 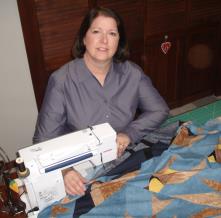 Shelly’s first quilts were made just to use up scraps of fabric she had left from making clothing for her family.  She started entering her work in the Nebraska State Fair in 1977; her pieces have nearly 150 ribbons including four Pride of Nebraska awards and five Best Original Design awards. Her quilts have received prestigious recognition in numerous quilt competitions across America, Europe and Japan. She is perhaps best known for her miniature quilts that have won first place in national quilt contests in California, Indiana, Illinois, Missouri, Florida, Texas and the 1989 Lynn Harris Award for best miniature quilt in the National Quilting Association Show.
In 1992 Shelly was selected as the first recipient of the Jewel Pearce Patterson Scholarship sponsored by the International Quilt Association. The scholarship was awarded to one quilt instructor from the United States bi-annually.  As the winner of the scholarship she attended Quilt Expo Europa in The Netherlands.  At the 1993 Houston Quilt Festival she curated a display of her quilts inspired by that experience along with quilts made by her students.
In 1992 Shelly was commissioned to create a quilt for a new restaurant, that piece titled Crane River Morning is 26' 6" wide by
6' 3" feet tall.  In 2002 the quilt was donated to the International Quilt Study Center.  It is now on permanent display in the Hardin Center building on the campus of the University of Nebraska.  The Hardin Center is open to the public during regular office hours.
She was named the 1994 Woman Artist of the Year by the Lincoln/Lancaster Commission on the Status of Women.  In 1995 the Lincoln Arts Council purchased one of Shelly’s original quilts for their collection.  At the Annual Fred Wells National All-Media Art Exhibition, held at Wesleyan University in 1997, her quilt Double Dutch was selected as Best of Show.  Shelly’s quilts are in numerous private collections.
Shelly’s articles and patterns along with photos of her quilts have been featured in more than thirty quilt magazines.  Her first book Terrific Triangles was published in 1995.  It was followed by Small Quilts Made Easy published in 1998 by That Patchwork Place.  Her work has been included in nine books by other authors including Great American Quilts 1991, The Encyclopedia of Quilting and Patchwork Techniques, The American Quilters Society Quilt Engagement Calendar, The Quilt: Beauty in Fabric and Thread, and Art Quilts iof the Midwest.  Her patterns have been featured in the Keepsake Quilting catalog.
In 1985 she was one of the founders of the Nebraska State Quilt Guild.  She was presented their Golden Thread Award in 1991, “In recognition of and appreciation for outstanding and consistent contributions to the art and heritage of quilt making in the state of Nebraska”.  She has held several positions in the guild including serving as their president in 2004.
Shelly started teaching quilt making in 1984.  She has taught for guilds, quilt conferences and fabric shops both nationally and internationally.  Her resume includes teaching at ten Houston Quilt Festivals, three National Quilting Association conferences, and the American Quilter's Society show in Kentucky.  In 2000 she served on the teaching staff of Quilt Expo in Strasbourg, France.  In 2005 Shelly served on the jury for the International Quilt Association quilt show in Houston.  She has worked for the University of Nebraska Textile Department and the IQSC&M to teach quilting workshops for groups of visiting Japanese and Korean quilters.
Shelly was nominated for the 2004 Teacher of the Year Award sponsored by Professional Quilter Magazine.  Her recent commissions include creating four 100 inch tall silk applique banners for First Plymouth Church in Lincoln.  Two of Shelly's original quilts were a part of Lincoln Star Art, a multi-media community art project in 2006, one piece was named the Mayor’s Choice.  In 2007 she had eight pieces in the “Textile as Art” show at the So-Oh Fine Art Galley and a solo display of her work at the Spring Creek Audubon Center in conjunction with the Meadowlark Music Festival.
2008 began with Shelly's quilt, Crosses and Recrosses on display as part of the aCross Lincoln community multi-media art project.  Her quilt, Small Things Make a Difference was selected as one of the three winning quilts in the national contest co-sponsored by Mountain Mist Batting Company and the International Quilt Study Center.  The eleven finalist quilts from the "Crafting a Better Planet" competition were on display at the IQSC museum in Lincoln, Nebraska during the fall of 2008.
At the Nebraska State Quilt Guild's convention in 2009 Shelly was honored to be named to the Nebraska Quilters Hall of Fame.  She was the fourteenth honoree in the twenty-six year history of the award.  The Nebraska Governor's Mansion and the State Quilt Guild co-sponsored a contest in 2012 to find a quilt design for the mansion, the quilt made from Shelly's winning design is now on permanent display in the Governor's mansion.  For more information on this quilt please go to Shelly's Quilt Gallery page.
Shelly completed her certification to become an NQA Certified Judge at the 2014 National Quilting Association conference.  In 2015 she became a member of the National Association of Certified Quilt Judges (NACQJ).

Did you know that Shelly is a songwriter?......well sort of.  In 1986 she wrote a poem that was adapted into a song by the Singing Quilter, Cathy Miller and her husband John in 2002.  It was included on Cathy's CD,
A Quilter's Embrace.  Check it out on Cathy's website.  Look for the song Quilter's Husband's Lament and follow the directions to hear a sample.
James Ducey interviewed Shelly about her quilts that feature birds
Click on the red button to read the his article

It was an interesting experience to be interviewed for an episode of The Quilt Show at the quilting studio. The show with Shelly's interview and demonstration is in Series Fourteen #1410. It is available on The Quilt Show website.
If you are a member just click on this link: The Quilt Show, to find the episode. The interview starts around the 35:10 mark.